Concern about the spread of Ebola has been a hot topic throughout the U.S. since the positive testing of Thomas Duncan on September 28. Duncan died a mere 11 days later in a Dallas hospital from the virus.

To be clear, Ebola is not an airborne organism, but is very contagious when transmitted via contact with bodily fluids – including sweat, saliva and blood. Today the CDC is recommending hospitals to use an EPA-registered hospital disinfectant with a label claim for a non-enveloped virus (e.g., norovirus, rotavirus, adenovirus, poliovirus) to disinfect environmental surfaces in rooms of patients with suspected or confirmed Ebola virus infection. Ebola is the extreme when it comes to deadly viruses, but you can still take precautions to protect your staff from contagious viruses like Ebola! 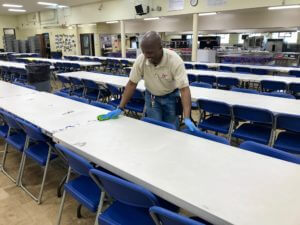 First you should know the basic differences between sanitizing and disinfecting surfaces the surfaces in your facility. As stated by the ISSA, “A disinfectant is a chemical that completely destroys all organisms listed on its label and reduce the level of pathogenic bacteria by 99.999 percent during a time frame greater than 5 minutes but custom writing essay service less than 10 minutes.” On the other hand, a sanitizer is listed by the ISSA as “a chemical that reduces the number of microorganisms to a safe level. It doesn’t need to eliminate 100 percent of all organisms to be effective.”

So go ahead and remember to disinfect hard surfaces when trying to rid your workplace or household of a virus or infectious disease. However, always sanitize around surfaces in which food prep takes place to avoid the risk of the harmful chemicals in disinfectants. If you have hired a company like C.M. Cleaning, there’s no need for concern- we’re ontop of it!